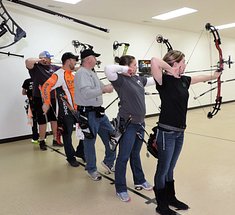 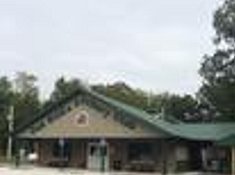 Marlon Slayton , who at that time was a member of the Kankakee Valley Bowhunters Club of Lowell, In. joined with fellow member of that club, Steve Fritts, and the two set out  to form a new archery club near their home town of DeMotte, In.

A meeting was held at the local American Legion Post to recruit any persons that were interested in forming a local archery club and on March 1, 1990 a club constitution was drawn up and the club was formed.  The name of the new club was then called The Oak Ridge Bowhunters Club Inc. and this was the name it used until 2009 when the named was officially changed with the Indiana secretary of state to The Oak Ridge Archery Club Inc.The first year, in 1990, Marlon Slayton was president and Steve Fritts was vice president , with Joe Wilson acting as secretary / treasure and George Wulitich held the first range master office.  Since that first year various club members have held different offices, with a few of the original members holding certain offices more than two or three times.  Joe Wilson held his office for seventeen years.  Since the beginning, dedicated members like Greg Smith, Joe Wilson, Chuck Dooge, Tom Kilgore, Marlon Slayton, Tim Hildebrand, Joe VanShapen, Jason Dooge and Justin Hildebrand, have been the back bone of this organization, with other members also contributing their hard work and efforts at various times throughout the years.

Originally the club leased property from Steve Fritts's uncle, Tom Fritts,  to use as a place to set up an outdoor animal target course and to host open public shoots.  That property was located just north of 1100 N. near 400 W. in the area that is now a subdivision.  In 1993 the club purchased the 40 acres of wooded land where it currently presides, located at 10506 N. and 100 W. in Wheatfield, In.  2016 marked the 26th anniversary of the club and The Oak Ridge Archery Club boasts one of the best archery ranges in the state.

The outdoor course consists of 30 various 3-D life size animal targets placed in a natural wooded setting.  The club hosts public 3-D events every 1st and 3rd Sunday throughout the spring and summer with their last shooting event in Sep.

On Feb. 22, 2014 the Oak Ridge Archery Club held their Grand Opening Event to showcase their newly completed indoor archery building.  This building, that was almost three years in the making, was made possible by a federal and state grant provided through the Pitman Robertson fund.  It took over two years, working with the Indiana Department of Fish and Wildlife and various other state and federal offices, to get final approval to build the facility.

Through the hard work of some of the members, the building was completed and the Oak Ridge Archery Club Inc. was now able to host indoor archery activities along with its already existing outdoor 3-D events.  Greg Smith acted as project manager for the construction of the this building and worked with various sub contractors and state offices to keep the building construction on schedule.  Greg also did a lot of the construction work himself, with help fromTim Hildebrand, John Smith, Jay Scrivnor, Marlon Slayton and others who put in many hours of donated labor to help complete the project.

Through the years the Oak Ridge Archery Club Inc. has been a gathering place for archers to hone their skills and for bow hunters it offers them a place to practice shooting at actual life size animal targets so that they may make the best accurate and humane shots to quickly bring down their intended qame.  The club has helped various local youth groups in the area by teaching them how to shoot a bow and offer them a place to enjoy a day of archery fun.

The Oak Ridge Archery Club has also supported various fund raising events.  Since 1990 this club is proud to state that it has raised and donated over $70,000 to the Riley Children's Hospital of Indianapolis, In., due largely in part to the Annual Riley 3-D event that they host each year in August. The Oak Ridge Archery Club Inc. is a family oriented organization and they continually strive to be a positive force and an asset to their community.